In general, Peru is organized into three social classes. The upper class is a minority and principally found in Lima – they consist of approximately 3% of the total population. The middle class consists of the workers and professionals that depend on a salary and job –form about 60% of the population and have suffered most under the successive crisis’s of recent years. The lower class is formed by the workers and the campesinos (the rural people/farmers of the country).

The workers have been based in the cities, especially in what are called the “pueblos jovenes” – or shanty towns – and many were campesinos that emigrated from their community to a urban centre. The campesinos who stay in the Andean communities are those that place more importance on their culture and the Inca religion. In the south of Peru they are bilingual or speak Quechua monolingually. In the north, the native languages have totally disappeared. The jungle is relatively untouched where the many tribes and communities that remain have had little contact with the outside world.

The Education system has been a challenge for all governments. In recent years, a gradual reform has been looking for education that fulfills the real needs of the country and forms agents of change. Constructivism and Significant Learning are the new approaches that the Ministry of Education and the University faculties are using to train their teachers. 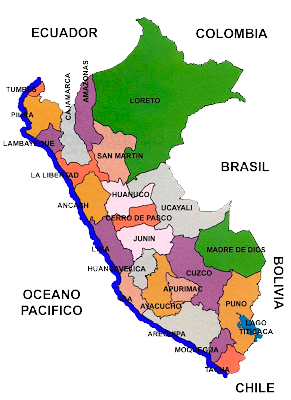 The Ministry of Health directs the Social Security system to thousands of Peruvians who attend the diverse hospitals of the State. Equally, the Retirement System permits thousands of dismissed workers to receive a small monthly pension. There are also private pension funds (AFP) that offer retirement packages that are won through a free competition.


were the old name given to the subdivisions of Peru. There were 24 departments until 2002, when they were replaced by the 25 regions Peru

Callao Province, which had not been part of any department, became a region of its own. 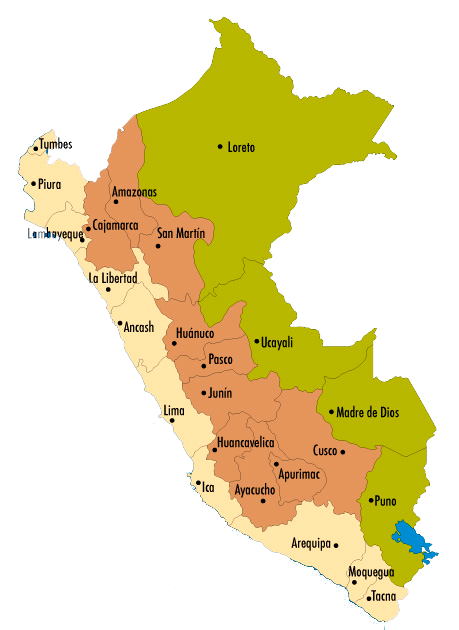 HOW TO ARRIVE PERU


Peru lies on the central-western coast of South America, with an area of 1’285,215 square km and a population of 26 million. Peru is a big country with long distance between the main tourist attractions. From Lima to Cuzco there are 1,165 Km (724 miles) and need 20 hours for a trip by road, and 01 hour by air.
CORDILLERA BLANCA TREK CORDILLERA RAURA TREK
HUAYHUASH TREK CUZCO TREK PERU
CORDILLERA BLANCA CLIMBING BOLIVIA TREK & CLIMB
ECUADOR TREK & CLIMB
CHILE TREK & CLIMB
ARGENTINA TREK & CLIMB