Usually the hike around the cordillera Huayhuash begins in the city of Chiquian (3,400 m.) 111 km. south of Huaraz. This little known route is one of the most beautiful and impressive trek. winds through such spectacular mountains as Yerupaja 6,634m.
The second highest in the Peruvian Ande , Jirishanca , Siula grande made famous by the film ( Touching the Void ), Rondoy , Ninashanca and Rasac.
This trail passes incomparably breath-taking lakes of crystalline water and tiny villages seeming out of touch with the rest of the world a wonderful recompense for those willing to venture of these paths. 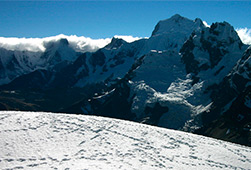 Diablo Mudo (the “Mute Devil”) is an attractive glaciated peak located in the Cordillera Huayhuash of Peru that presents a fine moderate mountaineering challenge in a remote and wild setting.