Cordillera Blanca Located in Ancash, it is the world’s highest tropical mountain range. Almost the entire mountain chain is protected by the Huascarán National Park, an area home to 663 glaciers, 269 lakes and 41 rivers, in addition to 33 archaeological sites.

The Cordillera Blanca is riddled with countless trekking circuits. However, some of them have become world-famous: the route of the Quebrada Santa Cruz gully is possibly the most popular of all. The trek sets out from Cashapampa and ends up in the gorge of Quebrada Llanganuco, at the edge of the emerald-green waters of the Llanganuco lakes. 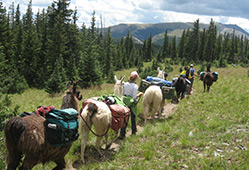 The Olleros – Chavin trek is a great alternative way to reach and visit Chavin, a relatively famous archelogical site. The trek leads across a southern pass of the Cordillera Blanca called Punta Yanashallash (map – to the middle right). 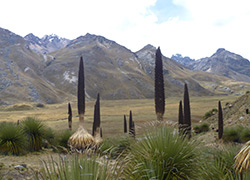 The surrounding mountains, known as the Black and White Cordillera for their contrasting colors, are exceptionally beautiful. The valley between these two mountain ranges is commonly known as the “Callejon de Huaylas”. 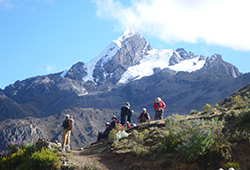 Quilcayhuanca trek – trekking Quicayhuanca This is a trail that is becoming more popular with time, due to the beauty of these 2 valleys, surrounded by peaks of 6000 masl, and the spectacular lagoons such as Palcacocha and Cuchillacocha. 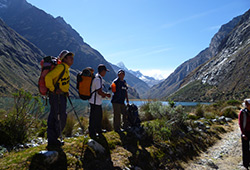 Santa Cruz Trek / trekking santa cruz one of the most popular hiking trails in the cordillera blanca . it is popularity is due to the spectacular mountain views , crystal lake and challenging passes. 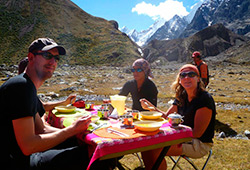 The Santa Cruz – Ulta Trek is an extension from clasic santa cruz trek , the extension trail start from Huaripampa valley in this trek we have two amazing high passes as punta union at 4,700m. 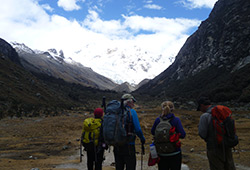 Quilkayhuanca Cojup Ishinca trek is a trail that is becoming more popular with time, due to the beauty of these 2 valleys, surrounded by peaks of 6000 masl, and the spectacular lagoons such as Palcacocha and Cuchillacocha. 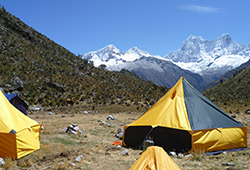 The cordillera Blanca must provide one of the most varied landscapes for trekking and climbing in the world. 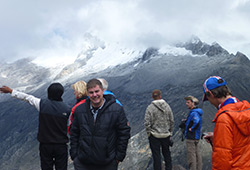 Along this trek we will see the pyramid of Alpamayo mount at 5,947 the which has voted the most beautiful the world The trek circuit Cedros – Alpamayo is one of the most scenically spectacular walking routes of the Andes. 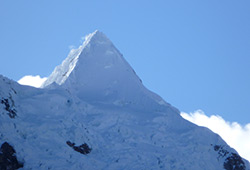 Circuit Cedros Alpamayo Ulta Llanganuco .The cordillera Blanca must provide one of the most varied landscapes for trekking and climbing in the world. 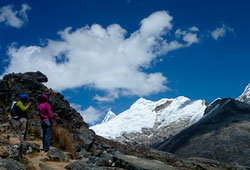 The Alpamayo base camp Trekking is a combination of the Santa Cruz Trek and circuit Cedros Alpamayo in the stunning Cordillera Blanca / White Range in Peru. 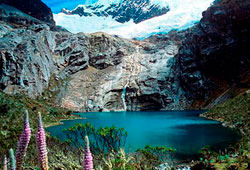 The Olleros Carhuascancha Chavin trek, the less known, unique and remote hiking trail in the conchucos valley. we can say unspoiled area within in the Cordillera Blanca. 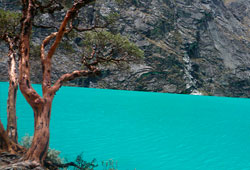 Pisco Base Camp Trek combines with 69 Lake in the Llanganuco valley within Huascaran National Park. 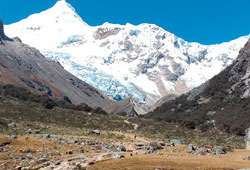 Short trek to Tocllaraju base camp, experience the 360-degree views in the Ishinca base camp on our 3 day Ishinca Valley trek. 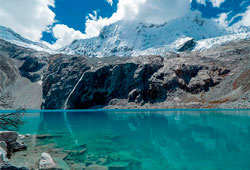 Santa Cruz trek and 69 lake trek is one of the most beautiful popular and challenging trekkings in the Cordillera Blanca - South America is one not to be missed! 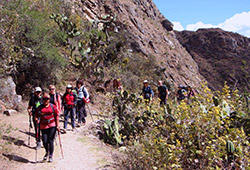